"Holy Orders is the sacrament through which the mission entrusted by Christ to his apostles continues to be exercised in the Church until the end of time: thus it is the sacrament of apostolic ministry. It includes three degrees: episcopate, presbyterate, and diaconate.

The divinely instituted ecclesiastical ministry is exercised in different degrees by those who even from ancient times have been called bishops, priests, and deacons. Catholic doctrine, expressed in the liturgy, the Magisterium, and the constant practice of the Church, recognizes that there are two degrees of ministerial participation in the priesthood of Christ: the episcopacy and the presbyterate . the diaconate is intended to help and serve them. For this reason the term sacerdos in current usage denotes bishops and priests but not deacons. Yet Catholic doctrine teaches that the degrees of priestly participation (episcopate and presbyterate) and the degree of service (diaconate) are all three conferred by a sacramental act called "ordination," that is, by the sacrament of Holy Orders." 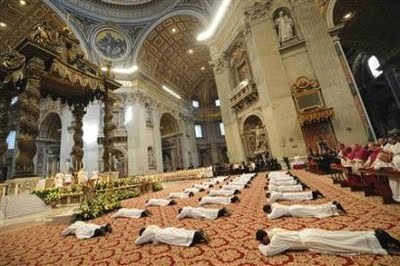 A diocesan priest can also be described as a parish priest, or one who works within and serves a particular parish within a diocese. Diocesan priests are very active people, with friends, hobbies and recreational activities, just like anybody else. It’s said that a diocesan priest is ‘someone who lives with the people and each becomes a part of the other’s life’. The role of a diocesan priest is to:

A diocesan priest commits himself to a celibate life and to obedience to the bishop. Both celibacy and obedience are rooted in of Christ who offered Himself in loving service of the Father. Celibacy calls for a spirit of selflessness and is a sign of the ultimate call to union with God. Obedience fosters a willing surrender to the will of God in all circumstances.

More Than a Job

Deciding on a priestly vocation is, in one sense, a career choice like any other. Skills and attributes include:

But being a priest is more than a job – it's a way of life, requiring strong personal and professional commitment that is reflected in all that you do – all that you are. A commitment to a daily life of personal prayer is at the heart of what it means to be a priest. There are many benefits and rewards in the priesthood. The opportunity to serve God and bring hope, joy and healing into the lives of many people brings with it a deep happiness and a sense of peace.

The Eucharist is the centre of a priest’s life and ministry. In addition to the celebration of the Holy Eucharist, a diocesan priest is ordained to:

Check out the Armagh diocesan website for those discerning a call to the diocesan priesthood: armaghpriest.com!

If you think you may be called to the priesthood, please get in touch with one of the priests of the parish, or the diocesan priestly vocations director, Fr Peter McAnenly (details below) for further information.

A Brief History and Explanation of the Permanent Diaconate

The apostles in Jerusalem, finding it difficult to combine the distribution of food to the poor with preaching the word and prayer, appointed seven ministers to serve those in who were in need (cf Acts 6:1-7), charity being considered as central to the ministry of the Church. The apostles handed over this duty to ‘men of good reputation, filled with the Spirit and with wisdom’ by praying and laying hands on them. Among these was Stephen, the first Christian martyr. Saint Paul, writing about 57 AD, includes deacons in his greeting in Philippians (1:1) and writing to Timothy lists the qualities and virtues which all deacons are expected to possess and exercise in their ministry (I Tim 3:8-13), indicating that the diaconate had already become a separate office in the Church. The very term ‘diakonia’ describes the central characteristic of this order: the deacon is called to service. The witness of the early Fathers of the Church acknowledges the importance of the diaconal ministry. Saint Ignatius of Antioch, about 100 AD, says that it would be impossible to have the Church without bishops, priests and deacons. He explains that their task was nothing less than to continue ‘the ministry of Jesus Christ’.

After the fifth century, however, there was a decline in the permanent diaconate in the Latin Church. From the early Middle Ages the diaconate remained only as a transitionalorder that men received as part of their preparation for the priesthood. There were occasional exceptions to this rule however, Saint Francis of Assisi, for example, was ordained a deacon but not a priest. But the reality was that the permanent character of this order was abandoned by the Latin Church for many centuries.

During the Second Vatican Council the permanent character of the order was restored and renewed when the Council in October 1963 called for the reestablishment of the ministry of the permanent deacon. In June 1967, Pope Paul VI carried out the desire of the Council when he published the Apostolic Letter Sacrum diaconatus ordinem in which he reestablished the permanent diaconate in the Latin Church. The Council, in its Dogmatic Constitution on the Church, echoes the ancient image and concerns of the New Testament when it speaks of the ministry and nature of the diaconate:

At a lower level of the hierarchy are deacons, upon whom hands are imposed "not unto the priesthood, but unto a ministry of service”. For strengthened by sacramental grace, in communion with the bishop and his group of priests they serve in the diaconate of the liturgy, of the word, and of charity to the people of God. It is the duty of the deacon, according as it shall have been assigned to him by competent authority, to administer baptism solemnly, to be custodian and dispenser of the Eucharist, to assist at and bless marriages in the name of the Church, to bring Viaticum to the dying, to read the Sacred Scripture to the faithful, to instruct and exhort the people, to preside over the worship and prayer of the faithful, to administer sacramentals, to officiate at funeral and burial services. Dedicated to duties of charity and of administration, let deacons be mindful of the admonition of Blessed Polycarp: "Be merciful, diligent, walking according to the truth of the Lord, who became the servant of all."

Permanent Diaconate in the Archdiocese of Armagh

For the first time in centuries the Archdiocese of Armagh has begun to accept and ordain men to the permanent diaconate. On 29th September, 2013 five men from across the diocese were ordained in St Patrick’s Cathedral, Armagh. Many more are currently in formation for service as deacons in the archdiocese.

Is God Calling You to Holy Orders?

Here are some practical suggestions to help someone who is thinking about a vocation to Holy Orders:

O Jesus, send labourers into your fields, which are awaiting holy apostles,

Enkindle in the hearts of men and women the spark of a vocation.

Grant that Christian families may desire to give to your church,

helpers in the work of tomorrow. Amen.

Please contact the Parish Office to arrange Baptisms, Weddings and other enquiries

© 2022 Parish Of Dungannon. All Rights Reserved. Website by Bluesun Software